I've been really lucky this year with new authors. Sierra Dean is one of these spanking brand new authors and i think she is one to watch. I have read her debut book "A Secret This Way Comes" her novella "The Secret Guide to Dating Monsters" and the second full book in this series " A Bloody Good Secret". When i read the first one i thought what the heck is up with this title? Once you get past the first chapter you have a ah haa moment and it's all very clear. The lead character's name is " Secret McQueen". I think it's pretty clever how she has set up the titles to the books so far. I've read that the next full book in this series is due out possibly spring 2012 and is titled "Deep Dark Secret". Sounds good huh?  While we're waiting in November will be another novella "Secret Santa". How about we get to a blurb for this book for now. 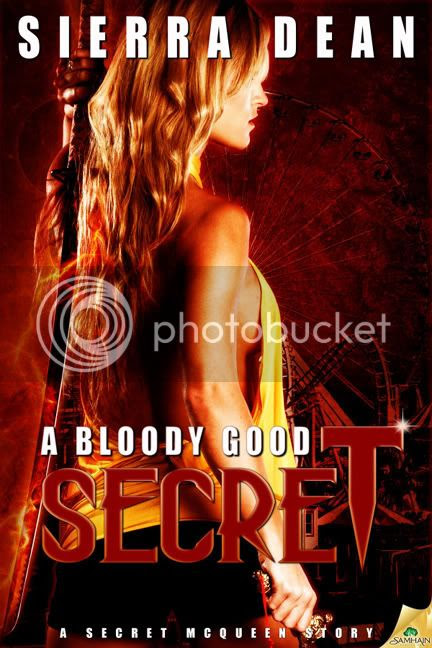 Straight from Sierra Dean's website. If you have not read book 1 you might not want to read beyond this.
pre buy now out Sept 20th 2011

THIS BLURB CONTAINS MASSIVE SPOILERS FOR SOMETHING SECRET THIS WAY COMES

You can’t keep a good Secret for long.

After cheating death twice in one night, confessing her true nature to her werewolf soul mates and being asked to kill one of her closest friends, Secret took a much-needed vacation. By running away.

Now she’s back in town—dragged kicking and screaming—determined to clear Holden Chancery’s name. Right after she finds out what he’s accused of. It shouldn’t be hard— Holden has a habit of using their new and scintillating psychic bond to break into her thoughts and dreams at some very, shall we say, awkward moments.

Just a few things stand in her way: a secretive Tribunal leader, a group of would- be vampire slayers and two werewolf boyfriends who refuse to let her operate in her customary lone-wolf style. Even less amusing are the terrifying creatures that someone is using in an attempt to gain control of the council. Even for this out-of-the-ordinary bounty hunter, it’s a challenge with potentially deadly teeth.

Warning: Contains an ever-plucky heroine with no shortage of weapons, super-hot mind games, an ever-complicated love triangle and one hell of a creepy amusement park.


I'm sure you can guess that i loved it!! Excellent writing. Very witty and it just kept me right there in the book. The characters are all for the most part very likable and well the Men seem to all be pretty darn hot. Secret seems to attract all of them too. She already has 2 werewolf soul mates but then she suddenly starts dreaming about have sex with Holden. What??? lol Then she is also in bed with her vampire boss Sig at one point in this book. What i am saying is you can't get bored reading this book. It moves along at a nice steady pace and there is something happening all the time. I felt like i was on this fast moving train and you don't want to get to your destination cause you're having to much fun. Like the previous book and novella there was what the heck that's the end already moment.  Not that is was a bad ending but you were so into it you are ticked there isn't more. Sierra also has the punch you in the face cliff hanger ending down pat. Going to have to learn patience for waiting for the next book reading this series. Luckily you won't have to wait long because there is another novella coming out in November called "Secret Santa".Christmas and Secret McQueen what could happen? lol A lot! Seriously if you are into paranormal romance this is a great series. If you have not tried it yet this is the perfect author to start with.  It might seem really bloody and gory going by the titles but it's not really about that.  All i can say is I'm ready and waiting for the next book. I give "A Bloody Good Secret" by author Sierra Dean 5 out of 5 Modokker book pick stars! Fabulous reading. Paranormal at it's best. Read more about the series by going to Sierra Dean's website. Blurbs and excerpts included!! www.sierradean.com

Since she has a blurb on her site for Secret Santa here it is too.


Secret Santa
A Secret McQueen Novella
Coming November, 2011
’Tis the season for ho-ho-homicide.
It’s the most wonderful time of the year. The season for mistletoe, Christmas lights…and a killing spree. When Secret’s friend, Detective Mercedes Castilla, asks for help to solve a series of murders longer than a string of lights, Secret resigns herself to the fact her holidays will be anything but peaceful.
It seems someone is killing New Yorkers in an unusually gruesome way, and as the bodies pile up faster than presents under the tree, the police are no closer to finding the killer than Secret is to finding the perfect present for one of her boyfriends, Lucas.

Tracking down a monster in Manhattan the week before Christmas is almost as difficult as shopping for her ever-expanding collection of loved ones. When tragedy strikes close to home, Secret must do everything in her power to put an end to the horror in time for Santa to come down the chimney.
Warning: Contains a less than merry McQueen with a sword and a reason to use it; a festive new use for mistletoe; and a promise that will haunt Secret like the Ghost of Christmas Future.