This is another great book by Dana Marton. I don't know how she does it but she packs so much story into a small amount of pages. The Black Sheep Sheik is only 219 pages but it's jam packed full of story and suspense and romance. There are bad guys and good guys and i kept guessing which was which. 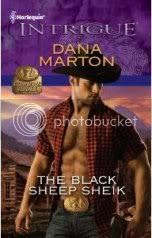 From Dana Marton's website
Black Sheep Sheik is the exciting conclusion to the six-book miniseries Cowboys Royale that I was asked to write with five other authors. I hope you’ll check them all out. Together the books tell the story of a brotherhood of royals who come to the United States on business and end up finding love. But each book is enjoyable on its own, having its own roller coaster plot and heart-warming romance. Happy reading!

The back cover blurb.
Waking up from a coma in a remote Wyoming cabin, Sheik Amir Khalid thought he was dreaming when he laid eyes on the woman he'd spent one steamy weekend with. Dr. Isabelle Andrews was every bit as gorgeous as he remembered—and nine months pregnant. But when shots rang out and it was clear their hideaway had been discovered, Amir's questions had to wait. Desperate to keep Isabelle and his unborn baby safe, Amir vowed to personally guard them 24/7. And as the independent beauty fought him at every turn, he knew it wasn't just royal protocol that made him want to keep her by his side. He'd give up everything that was expected of him if it meant protecting the family he'd only just met. Including his life.


Ok i was not fortunate enough to get to read the other 5 books in this series but I'm going to try and track them down. First i love sheik books and romantic suspense is my fav genre these days so these are right up my alley as they say. If the first 5 are as good as this one they will be worth tracking down. You can read this as a stand alone but a few parts of the book will clue you in that it's a series but it doesn't take away from this book at all.  Isabelle meets Amir at a hospital costume party. She is dressed like a harem girl and he a prince. Little did she know it wasn't a costume. He is a sheik. Royalty from a small country. It was one of those love at first site things or perhaps lust at first site. They spent 2 days together pretty much in bed and then Isabelle snuck out. Isabelle is a surgeon at the hospital and lucky for Amir that she is because the next time he sees her he's in a hospital bed in a remote cabin in the Wyoming wilderness and in bad shape. Amir gets the shock of his life when he gets a look at her and she is 9 months pregnant and a bigger shock still when he finds out he's the father. He insists that they marry but Isabelle says no way. No one is going to take over her life.  Someone is out to kill Amir and by extension Isabelle since she is with him. The book is spent with Amir trying to get her to marry him and getting away from the bad guys. Action packed there is no slow boring spots. It just clicks away packed  full of romance, hot sheiks, baddies and one pregnant lady. I just loved Amir. He starts off like most Sheiks do being bossy but finally figures out that Isabelle needs to be independent to be happy. Now he's got to figure out how to get her to trust that he can do that. Isabelle is one tough chicky who is the boss of herself and has worked hard to get where she is.   To read more about this book check out Dana Marton's website to read the first chapter. www.danamarton.com . Definitely a hot read. 5 out of 5 Modokker Book Pick stars for The Black Sheep Sheik by Dana Marton.