Everyone loves an anti-hero. Readers snap up books were the hero is emotionally wounded, keeps to himself, and no one can get past his protective shell…except the heroine. Often times he comes across as brash with an "I don't give a frick" attitude. But, what if the book you're reading has an anti-heroine? Is she a badass with an attitude?

In Breathing His Air, there's a sexy hardcore biker dude. He's bossy, controlling, and doesn't care what others think about him. His motorcycle club comes first, and that's his life. He's not an anti-hero. He actually has his act together!

The heroine, who owns a cute mobile coffee shack, hands out love advice with every cup, and seems to draw a crowd wherever she goes is the anti-heroine. Are you shocked?

A lot of my early ARC readers and reviewers were taken by surprise. They read the blurb, figured the heroine for a bubbly blonde who was a bit of a goof, who ended up smack dab in the middle of a territory war between the Bantorus MC and the Langsturns MC.

As with real life, we often see what others want us to see. The cashier at the store who always asks about your dog might go home to an abusive husband. The florist, who surrounds herself with beautiful flowers and witnesses other people's showing of love every day, suffers from depression. The young lady who helped you put your groceries in your car grew up in twenty foster homes and is currently living on the street. We only see what others show us.

I hope you enjoy getting to know Tori from Breathing His Air, and her story. She's a lot deeper than first impressions. Her story could shock you, but I think once you see inside her head, you'll respect her even more for what she's experienced. And, you'll see why Rain will do anything to keep her alive. 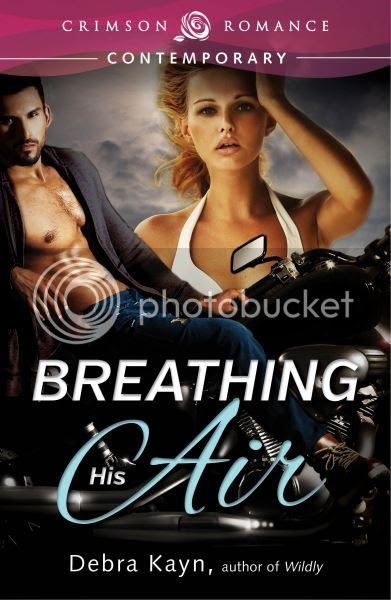 Buy from Amazon here :www.amazon.com/Breathing-His-Air
BLURB
She is love advice in a coffee shack, he's protection in a biker bar. When her past meets his present it's a killer cocktail that might get them shot, stabbed or otherwise dead.
TORI BALDWIN spends all her time traveling the states, running a mobile Coffee Shack and handing out love advice with every cup. She’s staked her rig in the parking lot of Cactus Cove—a local biker bar by all appearances— and plans to stay put for three months. Just long enough to make some money, without making any friends, before she moves to her next destination as she tries to stay ahead of a painful past.

RAIN BROOKSHIRE is the leader of the Bantorus motorcycle club, and owner of the Cactus Cove in the small town of , Washington. He wants the Lagsturns, a rival-bad-news motorcycle club, to leave town before they infect his town with trouble. He doesn’t trust them after his ex-girlfriend hooked up with Sanchez, the Lagsturns’ leader, and screwed him over.
With bullets flying and the Lagsturns putting on the pressure, the only way to keep Tori safe—since she refuses to leave town—is for Rain to claim her as his woman. She has no idea that Rain’s played his hand for all to see in the biker world. It doesn't help that Tori exhibits the three ideal classifications of his ideal woman—Classy, Sexy, and a total Goof— and he can't help but posture and lay down the law. But, when it appears Tori’s life is in danger, and the Lagsturns are innocent, he isn’t going to let the law stop him from keeping his woman safe.

Bio
Top Selling Romance Author, Debra Kayn, lives with her family in the beautiful coastal mountains of on a hobby farm. She enjoys riding motorcycles, gardening, playing tennis, and fishing. A huge animal lover, she always has a dog under her desk when she writes and chickens standing at the front door looking for a treat. She's famous in her family for teaching a 270 lb hog named Harley to jog with her every morning.

Her love of family ties and laughter makes her a natural to write heartwarming contemporary stories to the delight of her readers. Oh, let's cut to the chase. She loves to write about REAL MEN and the WOMEN who love them.

When Debra was nineteen years old, a man kissed her without introducing himself. When they finally came up for air, the first words out of his mouth were…will you have my babies? Considering Debra's weakness for a sexy, badass man, who is strong enough to survive her attitude, she said yes. A quick wedding at the House of Amour and four babies later, she's living her own romance book.