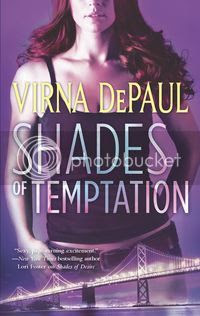 WILL HE HELP PROTECT HER...
Carrie Ward understands dangerous men, and she's got the scars to prove it.
These days, the Special Investigations Group detective saves her risk taking for
the job. But when she's asked to pursue a high-profile serial killer, she'll
have to join forces with the last man she wants to depend on-Jase Tyler, an ace
senior detective who's as reckless as she is cautious. And despite her best
intentions, the sparks begin to fly.


OR DRAW A KILLER FROM THE SHADOWS?
As Carrie and Jase race to try to save the next victim, the passion that
simmers between them ignites. But a cunning killer at the top of his game is
challenging Carrie to play to the very end. Now all she can count on are her
instincts-and Jase, the one man daring enough to keep her safe....

Shades of Temptation is the follow up to Shades of Desire in the Special Investigations group series by Virna DePaul. I read book one and enjoyed it. It was a bit more intense than what i usually read for romantic suspense but i liked it. Shades of Temptation is book two and for me a whole lot more intense than book one. Jase and Carrie are on the same team, both are attracted to each other but have never acted on it. They each have their own internal problems with their pasts and their family lives growing up. Carrie is the most messed up in that area though. There are trust issues that the two have to work through. The romance portion of this book is small compared to the suspense part but for me it was part thriller as well. There is more violence that what i would expect in a romantic suspense.The writing was excellent and well done and i was surprised by the twists and turns throughout the story. Several things surprised me but i think that as i said already it's part thriller too and so the violence was a bit for me but true to the story being told. By the end i was stunned by some of how the story wound itself up. I was pretty torn up on how i felt about it. 4 out of 5 Modokker Book Picks starts for Shades of Temptation by Virna DePaul.

Find out more about Virna DePaul on her website here www.virnadepaul.com