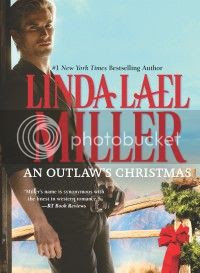 Available Now!
With his wild heart, Sawyer McKettrick isn’t ready to settle down on the Triple M family ranch in Arizona. So he heads to Blue River, Texas, to seek a job as marshal. But in a blinding snowstorm he’s injured—and collapses into the arms of a prim and proper lady in calico.


The shirtless, bandaged stranger recuperating in teacher Piper St. James’s room behind the schoolhouse says he’s a McKettrick, but he looks like an outlaw. As they wait out the storm, the handsome loner has Piper remembering long-ago dreams of marriage and motherhood. But for how long is Sawyer willing to call Blue River home?
As the gray skies clear, Piper’s one holiday wish just might bring two lonely hearts together forever.

I'm a big fan of Linda Lael Miller's McKettrick series. The original books are probably still my favorites. This one is more in that time frame than her latest books in the series. Set in in 1915 the main two McKettricks in this book are Sawyer McKettrick and Clay McKettrick(A Lawman's Christmas) sons of Jeb and Kade McKettrick from the original books in this series. It was fun to go back and kind of visit those books. There are some surprise appearances at the end of the book that i was so happy to see.

Poor Piper like all books set in what i call way back when she as a school teacher was compromised by doing a good deed and saving Sawyer's life. If she was a man i wouldn't have mattered but back then apparently if you stayed in the same house ( even if it's a school house) with a man who wasn't your husband you were a fallen woman. Never mind the man was half dead from a gun shot wound and had no idea what was going on for hours. Piper had been a orphan and raised with her cousin Dara who was married to Clay McKettrick and convinced Piper to move out to where they lived in Blue River Texas. She took on the job of school teacher but had decided to save her every penny and move back where she came from. All that ends when she finds Sawyer in the snow and drags him in the school house in a blinding snowstorm. Her reputation is ruined the minute she does this but she could not possibly leave him there to die. Sawyer was a body guard of shorts and got tangled up with his boss's wife.  He left before things got complicated but the his boss wants him dead. That's why he finds himself shot 5 minutes after getting into town.Which perpetuates the idea he might be a outlaw to Piper when she find him and he's also carrying a gun. I enjoyed this book. You have some danger from the shooter but you have your romance between Sawyer and Piper as they get to know each other. Piper struggles to find herself and her purpose and her place as a married woman. Loved the characters and like i said the surprise at the end. Well worth reading if you love a good western romance but more so if your a fan of the original books in the McKettricks series. 4 out of 5 Modokker Book Picks for An Outlaw's Christmas by Linda Lael Miller.