Book review: Lean on Me (Holloway) by HelenKay Dimon 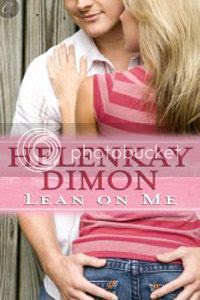 LEAN ON ME
Carina Press
October 2012
Cassidy Clarke once climbed the world’s highest mountains, but after an unexpected illness ends her career she’s back in her hometown, broke and hoping for a little luck. But the townsfolk aren’t exactly putting out a welcome mat for the woman who once snubbed them in the media, despite her apologies now.

Mitch Anders knows someone has set up camp on the grounds of his plant nursery, and he’s surprised to find his sexy high school crush ducking questions about where she’s staying. Though he’s sworn to stop cleaning up other people’s messes, Mitch offers Cassidy a job and a place to stay—his place. Bedsharing optional, but definitely welcome.

Out of options and too attracted to Mitch to keep things platonic, Cassidy says yes to his offer. She wants to get back on her feet financially and start a new career. She never expects to suffer a different kind of fall, one that has her believing Mitch just might bring her something bigger and better than luck.

This is book 2 in the Holloway series which Helen Kay describes on her website.

"A small-town contemporary romance series. The books focus on the men and woman of Thomas Nurseries, a landscape company in Holloway, West Virginia, and provide an emotional and sexy story in a novella format."

Book 1 was a Christmas story from 2011 called "It's not Christmas without you". I read it last year and really enjoyed it so i was happy to see another installment in this novella series. Cassidy Clark was shy in school. Quiet and kept to herself. The one thing she concentrated on was climbing. As a adult she turned herself into a world class climber. She made a big name for herself. So big in fact she had sponsors and a team that she needed so she could do the big climbs. She had everything she could ever want out of life. It all fell part over a short period of time. Sick from a illness caused from the high climbs she gave a interview where she bad mouthed her hometown. Delirious at the time she didn't realize until later what she said and the reporter didn't care. Now everyone in her hometown hates her. Top it off after finding she couldn't do the climbs anymore the guy handling her money wasn't taking care of it so much as stealing it. She's broke. Then her beloved mother dies. The people in town all have ideas about Cassidy but no one knows the real truth.  Mitch had a crush on Cassidy in high school but thought she hated him. She's back now and all the rumors about her don't bother him at all. The old feelings are still there but now their both older and more mature. Problem is there are some red flags about Cassidy that Mitch is curious about. He decides one way or another he's going to find out what's going on. Mitch always wants to help but has his own problems with opening his heart. Question is can either of them open up enough to make a relationship work? This story has a serious as well as a fun side and they are nicely meshed together by HelenKay Dimon. You might laugh and you might cry but in the end you just feel good when your done. 5 out 5 Modokker Book Pick stars for Lean on Me by HelenKay Dimon

Find out more about Lean on Me and HelenKay Dimon's website here www.helenkaydimon.com

Then get ready for the next installment in this novella series in December with "We'll be home for Christmas" Pre-order now here www.amazon.com/Well-Be-Home-Christmas-ebook