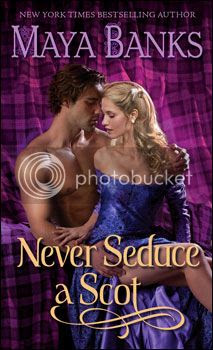 Never Seduce a Scot
This sinfully sweet new romance from Maya Banks features a remarkable woman whose rare gift teaches a gruff Scottish warrior how to listen with his heart.

Eveline Armstrong is fiercely loved and protected by her powerful clan, but considered “touched” to outsiders. Beautiful, fey, with a level, intent gaze, she doesn’t speak. No one, not even her family, knows that she cannot hear. Eveline taught herself to read lips and allows the outside world view her as daft, content to stay with her family. But when an arranged marriage with a rival clan makes Graeme Montgomery her husband, she accepts her duty—unprepared for the delights to come. Graeme is a rugged warrior with a voice so deep and powerful she can hear it, and hands and kisses so tender and skilled he awakens her deepest passions.

Graeme is intrigued by his new bride, whose silent lips are ripe with temptation, whose bright, intelligent eyes can see into his soul. As intimacy deepens, he learns her secret. But when clan rivalries and dark deeds threaten the wife he has only begun to cherish, the Scottish warrior will move heaven and earth to save the woman who has awakened his heart to the beautiful song of a rare and magical love.

This is book one in a new historical series for Maya Banks. It's also the first ever historical written by her for me to read. I wasn't sure what to expect but i heard really good things about her other historicals so i was hopeful. I'm kind of particular about my historicals too. This one starts out with The Montgomery's and Armstrong's as bitter enemies. They are also the largest of the clans in the area and the king wants to make them behave and get along. He makes Graeme Montgomery marry Eveline Armstrong. Eveline is thought to be daft or touch in the head. Truth of the matter is she is just deaf. She can read lips if the person is facing her.  She suffered a terrible accident 3 years prior when she was thrown from her horse into a ravine and was badly injured and not found for 3 days. They wasn't sure she would even live. She was also keeping up the ruse she was daft to protect herself from someone. Graeme hates the Armstrong's so much but one look at Eveline and he's pretty much lost right on the spot. lol The majority of the story is spent on them getting to know each other and her trying to get his clan to like and respect her but there is also a threat hovering that comes to haunt them. I love how Graeme treats her with respect right from the start. Takes a while for the others to come around and i like that that wasn't rushed. My favorite part i think is when Graeme finally figures out she's deaf and not daft as the rumors were going around. It's was great to see him get excited about the fact that he can communicate with her and he never treats her as anything below him. Instead he elevates her. I fell in love with the characters and look forward to more in the future from this series. 4 out of 5 Modokker Book Pick stars for Never Seduce a Scot by Maya Banks.