I am pleased to have been able to interview debut author Elisabeth Barrett. She has two books available right now from her Star Harbor series. I was lucky enough to read and review both here on the blog and loved both!! Below are 5 questions i asked her and her answers. I hope you'll check out her work. I am pretty sure you would enjoy it as much as i have.

1. When did you know you wanted to be a writer? What there anything that influenced you to go after it?

I don’t know that there was a clear-cut time when I just knew I was going to write a novel. What I can tell you is that I was an avid reader. Jayne Ann Krentz and Nora Roberts were two of my favorites, but I read widely in most romance genres. One day in 2005, I began writing a story—the story that is now going to be published as Long Simmering Spring. At first, I was just writing for fun. And then, as I got closer and closer to finishing the draft, I thought, “Wow! There’s really something to this.” So I kept going and finished it.
As far as influence goes, I’ll give the credit to my husband, Mr. B, for encouraging me to find an agent and to pursue publication seriously once I’d finished the manuscript.

2. I love the titles to your books. Two published so far with the other two coming out next year. The play on words is great! I mean Blaze of Winter your current release sounds dramatic. You wonder though what the heck does it mean? Once you read the book if becomes pretty clear. How did you come up with the titles?

I’m such a title fiend! As a reader, book titles really matter to me, and I always try to analyze them in the context of the work as a whole. When I started thinking about writing the books in the Star Harbor series, I wanted to make sure that each title teased out some aspects of a particular book and that all of the titles used similar structure to ensure that readers would recognize the novels as belonging to a series. I decided that each title would have three facets:  a mention of the season, a reference to the sexiness (read: fire and heat) of the love story, and something to evoke a sense of passion and mystery.
Here are the titles for those who might know what they are:
Deep Autumn Heat  (July 2012)
Blaze of Winter (September 2012)
Long Simmering Spring (coming in May 2013)
Slow Summer Burn (coming in August 2013)

3. What genre of books do you enjoy reading yourself and do you have any favorite authors?

I love romance (of course!), and I’ve already told you of my abiding love for Nora and Jayne. Some of my other favorites are Susan Mallery, Mariah Stewart, Emily March, Molly O’Keefe, and Jennifer Probst.
I also love swashbuckling stories of the type told by Arturo Perez-Reverte and Carlos Ruiz Zafon.

4. If you could use 3 words to describe yourself what would those 3 words be?

Oh, my, this is tough. I asked Mr. B to help me with this and here’s what he came up with: Trustworthy. Nurturing. Creative.

5. Most everyone knows there are two more books in the Star Harbor series. Is there anything else in the works yet for after this series? If not can you tell us anything about your spring release Long Simmering Spring which will be Cole Grayson's story right?

I’m not sure about “most everyone,” but I’ll take that as a compliment! J
I’ll start with the upcoming Star Harbor books. You’re right that the May 2013 release will be Long Simmering Spring (how about that for timing!), and will feature Cole Grayson, who returns to Star Harbor as the town’s new sheriff. He and Julie Kensington, the local physician, have known each other since grade school, and she’s less-than-impressed with the bad boy he used to be. But after stints in the military and on Boston’s police force, the question isn’t whether he’s changed, but how much. It isn’t long before Cole realizes that his sweet, sexy doctor will force him to confront his past and help him to face the future.

And in August 2013, the final Grayson brother, Val, gets his HEA with Slow Summer Burn. I am incredibly excited about both novels!
I am working on another series right now, a contemporary series set in Connecticut (yay, New England!), so stay tuned for news and announcements. 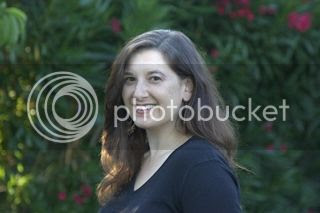 About Elisabeth:
Raised in a sleepy little Connecticut town, Elisabeth draws on her upbringing to write small-town romances. Her summers spent living and working on Cape Cod and Martha’s Vineyard were the inspiration for the Star Harbor series, which kicked off with Deep Autumn Heat and continues with Blaze of Winter. Currently, Elisabeth lives in Northern California with her husband and three children. Find her online: Website | Blog | Facebook | Twitter | Goodreads

About Blaze of Winter:
Winter heats up in this hot new Star Harbor romance, as another sexy Grayson brother, a wickedly handsome writer, plots his happily ever after with a sweet stranger.
Frustrated with her job in Boston, social worker Avery Newbridge welcomes the opportunity to reassess her life when family asks her to help manage the Star Harbor Inn. Trying to figure out her future is overwhelming enough, but she doesn’t count on distraction in the form of one Theo Grayson, the gorgeous, green-eyed author who she knows is trouble from the moment he saunters into the inn.
Not only does he have a talent for writing swashbuckling adventures, but Theo also has a soft spot for big-hearted damsels in distress, especially a woman who’s great at helping everyone—except herself. Avery’s demons challenge him, but for desire this hot, he isn’t backing down. With every kiss and heated whisper Theo promises her his heart . . . if only Avery is willing to open up and accept it.
Available now!!!