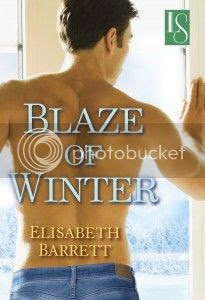 Winter heats up in this hot new Star Harbor romance, as another sexy Grayson brother, a wickedly handsome writer, plots his happily ever after with a sweet stranger.


Frustrated with her job in Boston, social worker Avery Newbridge welcomes the opportunity to reassess her life when family asks her to help manage the Star Harbor Inn. Trying to figure out her future is overwhelming enough, but she doesn’t count on distraction in the form of one Theo Grayson, the gorgeous, green-eyed author who she knows is trouble from the moment he saunters into the inn.

Not only does he have a talent for writing swashbuckling adventures, but Theo also has a soft spot for big-hearted damsels in distress, especially a woman who’s great at helping everyone—except herself. Avery’s demons challenge him, but for desire this hot, he isn’t backing down. With every kiss and heated whisper Theo promises her his heart . . . if only Avery is willing to open up and accept it.

This is Elisabeth Barrett 2nd book. I read her first which is the first book in the Star Harbor series. Book 1 "Deep Autumn Heat" was Sebation or Seb's book. Book 2 is his twin brother Theodore or Theo's book. Theo comes back to Star Harbor in Book 1 for some R&R but also to write. Seems he's gotten a little stale and the words are just not coming right now. Theo was always the brains of the Grayson brothers. Who was always the one doing the plotting when they were up to something. Now back in Star Harbor he is staying with his two older brothers on their house boat. With no enough room to move he decides to take a room at the Inn.  This is where he smacks right in to Avery Newbridge. Avery is back in town trying to get own life together. She's a social worker for people battling substance abuse and when one of her patients turns up dead she questions whether she's fit for the job anymore or not.  Right away she's attracted to Theo but she's had some bad experiences in the past and with all her work problems and her aunt who is recovering from cancer she doesn't have room for men.

I didn't think i would care for Theo as much as i would the other brothers. He doesn't seem quite as alpha male as the others in book 1. He's comes across as brainy and boring a little. Wow was i wrong. The man is brainy alright but HOT and sweet and a gentleman too. He realizes what Avery needs and tries his best to be there for her and give her the room she needs. I just loved him to bits. I felt bad for poor Avery. Social work is not a easy field and i think Elisabeth Barrett portrayed that well here. I loved the bits of the other brothers lives and the bit of danger as well. There is a theme running though this series about some keys and a sunken ship. I really hope that that is brought out more in the next two books. I don't think it's getting enough time in the 2 books in the series so far. Can't wait for the remaining two brothers Val and Cole's stories. Unfortunately we're going to have to wait til spring of 2013 to find out what happens with the remaing two Graysons. 5 out of 5 Modokker Book Picks stars for Blaze of Winter by Elisabeth Barrett. By the way. I love the titles to the books in this series. The play on words is awesome.
DEEP AUTUMN HEAT
BLAZE OF WINTER
LONG SIMMERING SPRING
SLOW SUMMER BURN

Find out more about Elisabeth Barrett and the Star Harbor series on her website here www.elisabethbarrett.com