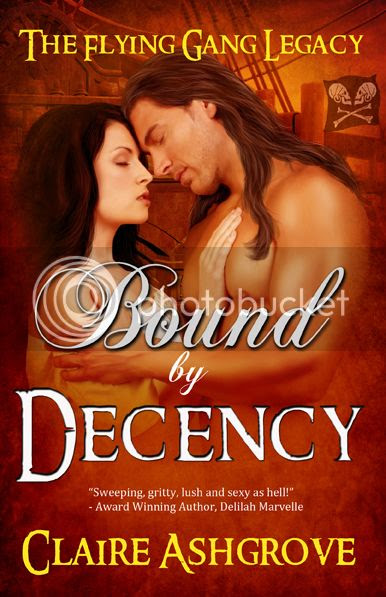 Once, Cain sailed with the cutthroats of The Flying Gang, fearless Captain of The Kraken, bound to no one save the sea. After inheriting a portion of Spain’s Royal Inheritance, he resigned the life of brigands for a chance at honest wealth. With the secrets of his piracy tucked away, he achieved his lofty aspirations. But when his partner and best friend betrays him to the Royal Navy, Cain’s dreams are ripped to shreds. He’s left with his ship, the tattered remnants of a stolen future, and a piece of Spanish mystery. Wanted by three nations and destined for the gallows, he returns to the legendary band of buccaneers for one purpose---vengeance.


Kidnapped by the formidable Cain, India Prescott discovers he intends to kill the man she’s to marry, Richard Grey. Cain’s story reveals betrayal. Treachery that extends to her as well. Although she holds the key to retribution, India refuses to become another man’s pawn. Freedom lies before her, the liberty to shrug off propriety, make her own decisions, and claim her destiny. But when she uncovers goodness in Cain’s soul and he awakens passion in her heart, she must combat the chains of convention once more.

Only this time India's not fighting society. She’s battling a pirate bent on keeping her decency intact.

This was my first Claire Ashgrove novel. With a new author you never know what to expect but as always we hope for a great book. It takes a while to set up the story and lay out all the background for this book. Theodore is a respectable man in society he is also Cain a dreaded pirate. His best friend (Richard )or so he thought betrays him and turns him in as a pirate and he is captured and sent to be hung. A couple of his friends help him escape and he kidnaps India, Richard intended. He expects India to know where Richard is and then he's going after him to kill him. India won't betray Richard to this nasty pirate. She knows Theodore but doesn't recognize him as Cain at first. The story is spent trying to get her to at first tell him where Richard is and then also protecting her virtue. Cain/Theodore is torn between his pirate side and his noble side. He knows his noble stature in society is all but gone now that Richard has betrayed him. India on the other hand has suffered all her life being told what to do and stifled by everyone for being smart and wanting to run her own shipping business. After a while she finds peace on the ship with Cain and peace with him. She finally realizes what and who Richard is too. He's been using her. Unfortunately they both Cain and India keep throwing mixed signals and can't seem to get going on a path together. Finally no matter how much Cain loves her, he decides he must be noble at least once more and take her back to her father. India for her part makes a plan to trap Richard and clear Cain so they can be together.  In conclusion, I liked the story, I liked the characters. The writing was really good i just felt it took to long and was to slow for the first half almost of the book. It seemed to take a long time to get to some real action between Cain and India. Once it picked up i enjoyed it a lot more. I would read this author again. 3 and 1/2 out of 5 Modokker Book Pick stars for Bound by Decency by Claire Ashgrove.

Find out more about this book and Claire Ashgrove's other work here on here website. www.claireashgrove.com