Book review: All He Ever Needed ( Kowalski series book 4) by Shannon Stacey 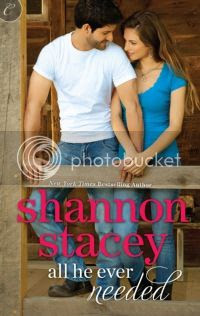 He won’t stay put for a woman, and she won’t chase after any man…


Mitch Kowalski lives out of a suitcase—and he likes it that way. Traveling for work has the added bonus of scaring off women who would otherwise try to tie him down. But when he’s called home to help with the family lodge, he’s intrigued by the new girl in town and her insistence that she doesn’t need a man. If there’s one thing Mitch can’t resist, it’s a challenge.

After a nomadic childhood, Paige Sullivan is finally putting down roots. Determined to stand on her own two feet, she lives by the motto “Men are a luxury, not a necessity.” But when Mr. Tall, Dark and Hot pulls up a stool in her diner and offers her six weeks of naughty fun with a built-in expiration date, she’s tempted to indulge.

They’re the perfect match for a no-strings fling. Until they realize their sexy affair has become anything but casual…

I have read a couple of the Kowalski series book but not all. The ones I have read i have enjoyed though. All He Ever Needed is book 4 in this series. Mitch Kowalski was a little too frisky in his youth. Add to that that he and his brothers were always getting into trouble and the town of Whitford never forgets his transgressions. Mitch comes home to help out his brother Josh who broke his leg and is laid up with a cast. He finds out the lodge he and his siblings own together, but Josh runs is in bad need of repair. He's home for the next 6 weeks to see what he can do. In the mean time he also meets Paige Sullivan. She bought the diner in town which was closed down the last time Mitch was in town 3 years ago. Now it seems to be doing well with Paige at the helm. Paige's car broke down in Whitford, MA two years ago and the people were so nice she decided to stay. She's been doing well for herself and has a no man needed philosophy. Unfortunately when Mr. no commitment Mitch Kowalski walks into her diner she's not so sure she can keep that up.
Mitch doesn't commit ever. He came really close once and that ended in disaster so he's not going there again. He's always up front with the ladies and they always part on happy terms. Paige is different. She resists his charms even when she really wants him. Her mother always bounced from man to man. Always needing one to be happy and so Paige is turned off men and relationships. They seem to dance around each other for much of the book and it's funny to watch Mitch have to be the pursuer when he is usually the one being pursued. Paige sticks to her guns for a long time until she decides two years is long enough a dry spell. She wants Mitch but doesn't want a commit either so why not. Problem is no matter how hard they try to keep it casual it's nothing but. For once too Mitch isn't the first one to walk away. The one thing that bugged me a bit is Mitch is really portrayed as a horn-dog basically. I'm not sure if i was Paige if i would want anything to do with Mitch after hearing from all over town about his sexual escapades even though many of them are embellished. Mitch though has grown up and no matter how successful he is in life the town can't seem to let his sins of the past go. Like how this played out. Little different way than they usually go but enjoyable because of it. 4 out of 5 Modokker Book Pick stars for All He Ever Needed by Shannon Stacey.

Find out more about Shannon Stacey and the Kowalski series here on her website. www.shannonstacey.com