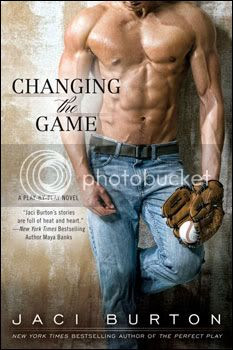 Most people play by the rules. Gavin and Liz aren't most people...

Win at any cost. That's always been the mantra of sports agent Liz Darnell. When she carries things too far and risks losing her number-one client, baseball pro Gavin Riley, Liz realizes that she'll have to work extra innings to win him back. It might not be too much of a stretch. She's had a thing for this player's moves since she first laid eyes on him, and by the looks of it, he wants her just as bad.


Gavin's more than ready—especially when Liz is offering herself as part of the bargain. And as much of her as Gavin wants. For added thrills, he decides to throw a little curve ball Liz's way to see just how far she's truly willing to go to keep him as a client. But when love unexpectedly enters the playing field, neither Liz nor Gavin are ready for the biggest game-changer of them all.


This is book 2 in the Play by Play series. Book one was called "The Perfect Play" and involved Gavin's brother Mick. In that book Liz comes out looking like a coldhearted bitch. Things get turned around a bit in book 2 and Mick turns into the jerk. Interesting switch up. Liz isn't what she seems and Gavin works at trying to find the real Liz. He gets flashes of her throughout the book but it takes him a while to get the total picture. Liz on the other hand is trying hard not to let Gavin in. She decides that although she's loved him for the past 5 years he doesn't need to know that and she will enjoy him while she can. Little do they know that they are meant for each other and they each bring out the best in themselves when together. If you hated Liz in book one i am pretty sure you'll love her by the end of book 2. You get flashes of characters from book one and a intro to a some from book 3 "Taking a Shot" that comes out in March of 2012. It took a while for this book to get started for me and really get my interest but when it did it took off and i hung on for the ride. 4 out of 5 Modokker Book Pick Stars for Jaci Burton's Changing the Game. Find out more about this book and the Play by Play series including some excerpts by checking out Jaci's website here www.jaciburton.com
Posted by Modokker at 1/19/2012 06:09:00 AM