This review by Sarah 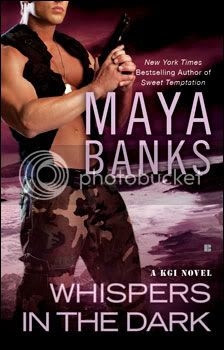 Whispers in The Dark (KGI Series #4) by Maya Banks


I have this bad habit of starting a book series by jumping in (often unintentionally) somewhere in the middle. And Whispers in the Dark is a great example! It is the 4th novel in a series featuring the Kelly brothers and their paramilitary organization, and the first book I've ever read by Maya Banks.

The story starts as Nathan is being tortured by his captors. He has been a prisoner for weeks and is close to giving up. But he soon hears the voice of Shea in his head, giving him strength and somehow taking his pain away, giving him the strength he needs to hang on. Shea has somehow randomly psychically connected to Nathan, and does everything she can to save him. But Shea has problems of her own, and is being chased by the mysterious men who murdered her parents and are hunting for Shea and her sister.

The pace is relentless, and the action is nail-biting, heart-thumping and very exciting. The romance between Shea and Nathan was deeply emotional and intimate, as well as sexy as hell. Their psychic link intensifies the emotional bond between them, and their shared experiences of pain and danger heighten this bond. I loved the fast pace and the focus on the weapons, action and operations of the KGI teams.

Also, this book has the BEST DIALOGUE EVER regarding romance novels.

On page 219, Nathan has just pulled Shea to him and is kissing her in front of everybody, including P.J., a crack sniper and the only female member of KGI, and Cole, another team member.

"This is better than a romance novel," P.J. said with a wistful sigh.

"You read that stuff?" Cole demanded.

"Why the hell do you ask the question like that?" P.J. said, annoyance evident in her tone and expression.

"I'm tempted to shove one of my romance novels up your ass," P.J. said sharply. "But I love my books too much to desecrate them like that. I'll settle for my boot."
Hah!


And now the rest of the story: this is easily the first romance novel I have ever read that seems to be written for the straight male audience. A straight male audience that loves military/paramilitary romance novels. It's got to exist, right? So why do I think this? The book is written in third person narrative, and while the reader spends enough time with Shea to get to know and care about her, the focus is mostly on Nathan, his feelings and his inner dialogue. By the time Shea and Nathan meet in person, after months of an intense psychic emotional bond, Nathan is overcome with lust/desire/love and their first sexual encounter is realistic - which is to say, rather quick. The next few times they have sex there's a lot of speed, the actual deed itself, and lots of oral sex performed on Nathan by Shea. Basically it's a guy's idea of heaven. Repeatedly. I kept waiting for Nathan to return the favor but it wasn't happening.

After Nathan is rescued, and then after he rescues Shea, they return to the Kelly compound where there is nonstop brother/tough guy teasing and dialogue. It's entertaining, realistic and feels genuine. I really loved it.

All the Kelly brothers are super tough, hunky, former military special ops, all around good guys. I liked these guys so much I plan to read the first 3 books in the KGI Series to learn their back stories.

Add to that the fact that Shea (our romance novel heroine) felt like an under-developed character to me. She has cool psychic powers and is tough and resilient, but mostly she is helpless, vulnerable, so tiny and slender (enough with the stereotypical slender, tiny heroines, people! How the hell can she be so slender if she is also described as "plump" in all the right places - PUH LEEEZ!)

So there you have it - a romance novel focused on the hero rather than the heroine, with an exciting plot, adrenaline-laced action and a whole family of sexy military hunks with stories of their own. I will definitely be checking out the other novels in the series.

For more information visit the author's website at www.mayabanks.com. This page will get you to a excerpt for this book as well. It's a must read if you are on the fence about this book.
Posted by Modokker at 1/24/2012 01:00:00 AM