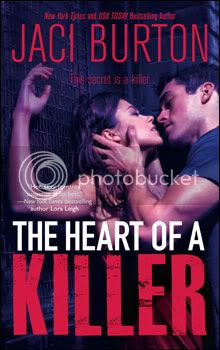 The Heart of a Killer

Book One in The Killer Series
Available now at: Amazon, Barnes and Noble, Books a Million, Chapters, The Book Depository.

No one said coming home would be easy. But for Dante Renaldi, it's murder.

Before the Special Forces hero has even unpacked his bags from twelve years of active duty, he's embroiled in murder—corpses bearing the brutal trademark he's seen only once before—on the worst night of his life.

The last time Detective Anna Pallino saw Dante Renaldi, they were in love. Now, he's part of the connection to a string of fresh homicides and a horrible assault Anna only survived thanks to him.

More than anything, Anna wants to trust Dante. But as the bodies and the coincidences stack up, Anna will have to decide, and fast: Is the man she owes her life to the very same one who wants her dead?

This is a brand new series by Jaci Burton called The Killer series. The heart of a Killer is book one. On her website she doesn't have any info on the next book so I'm not sure how this series will go. If the characters from book one will be in book two and so on. Time will tell. For this book  I have to say I have not read anything like this from Jaci before. I am only familiar with some of her contemporary books. This one was good but here and there i got kind of bored. Just a smidge though. In the beginning of the book starts with a prologue that explains how the main characters know each other as teenagers first, bonded as friends that ends with a terrifying ordeal and a death. Anna and Dante are a item and he just picks up and leaves it seems after the ordeal.  The book picks up after that 12 years later with Dante coming back after being gone for those 12 years and another murder. This book is heavy on thrilling suspense and light on romance.  It definitely leans more to the suspense. There are several murders that surprised me and the killer was a surprise as well. I had a suspect in mind but then he ended up dead so when i thought i had it maybe figured out i was wrong. lol This is a good sign in a book. If you can figure it out before your halfway through where's the fun? I can honestly say i was surprised and a bit shocked by who the killer was. You start liking your characters it sucks when they are not what you thought. I am excited to see where Ms. Burton goes with this series.  Aside from being bored a few times it was a great read with well written characters and a good plot. Certainly kept me guessing. 3 1/2 Modokker Book Pick Stars for Heart of a Killer. You can find out more about this book and Jaci Burton's other works by check out her website here. www.jaciburton.com/
Posted by Modokker at 11/10/2011 01:00:00 AM