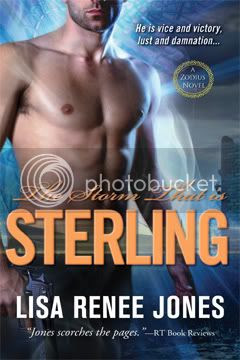 Sterling Jeter, Renegade Super Soldier, is fearless, powerful, and wildly unpredictable. His life-threatening mission is to save the beautiful, brilliant astrobiologist Rebecca Burns from ruthless villain Adam Rain. But their immutable mutual attraction threatens to put them in the path of death… or worse…


Adam, the leader of the evil Zodius soldiers has developed a street drug from his newborn’s DNA that is so addictive that he could easily created a worldwide dependency on him as the only source, as withdrawal kills the user. This drug will give Adam the power to rule the entire population if his plan for mass distribution is achieved. Sterling, and a brilliant, cancer stricken scientist, must stop Adam before it’s too late. But can Sterling trust this woman when he discovers this drug might be her only way of surviving cancer?. Is he in bed, and in love, with the enemy?

He may be invincible to everyone else…


Sterling Jeter has remarkable powers and has shown himself to be just about indestructible. But beautiful, brilliant Rebecca Burns knows that even a Super Soldier needs comfort, and so much more…

But she can see that deep down, he’s just a man…

Sterling and Rebecca’s teenage romance was interrupted, but years later the heat between them flares back to life. Even though it endangers everything they’re fighting for, it’s impossible to resist picking up right where they left off


The Hero: Sterling
He was created, molded, formed from life, love, and misery…

Lethally daring. Ruthlessly passionate. He invites death to his door. Welcomes it with each breath he draws, each step he takes. And thus he is danger. A volatile storm that will sweep across the calm realms of humanity and shake it to the depths of its core. And that storm is…Sterling.


The Storm that is Sterling is the 2nd book in the Zodious series. Book one The Legend of Michael  came out in May of this year and i really enjoyed it. This series is a a romantic suspense with a twist. These are your military alphas that so many of us enjoy but hopped up on alien DNA later known as GTECH's. Government experiments on soldiers produced these super soldiers who is turn eventually went rogue in two different factions when the government sought to get rid of them. They are the Renegades and the Zodious soldiers ran by twin brothers, Caleb and Adam Rain. One good and one evil. Sterling is one of the Renegades. A good guy who had kind of a rough life until he found his niche in the Army. Sterling is leading the fight to get rid of ICE an addicting drug put on the streets by Adam Rain. He is assigned to pick up a scientist one Rebecca (Becca) Burns who they hope will help them counteract the drug. One problem. Becca has cancer and is dying and Sterling has a past with her. Before Sterling can get her stashed away though she is taken by one of Adam's Zodious soldiers along with him.  This is a fast paced story. You're left with some guessing as to what's going on and who is who and how's it all going to end up all right. Or is it going to be alright. Lisa Renee Jones gives you a bit of a thrill ride all the way through and leaves you guessing as to what's next at the end of the book. I am loving her characters and I especially can't wait for Caleb (leader of the Renegades) to get his story and meet his  lifebond. This series is still revving up i think. 4 out of 5 Modokker Book Pick stars for The Storm that is Sterling. Find out more about this series and the author Lisa Renee Jones by clicking here. www.lisareneejones.com

Swing back by this blog tomorrow and Lisa Renee Jones will be guest hosting and giving away a pretty cool Prize.
Posted by Modokker at 11/08/2011 06:37:00 AM

Email ThisBlogThis!Share to TwitterShare to FacebookShare to Pinterest
Labels: Lisa Renee Jones, The Legend of Michael. GTECH, The Storm that is Sterling, Zodious series