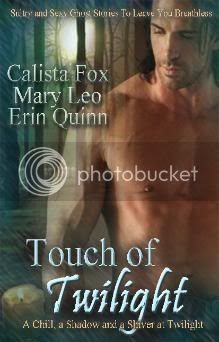 A Chill at Twilight

With her country music career in a downward spiral, Rachel Holt returns to her hometown of Onyx, Texas. There, a sexy cowboy named Luc Winston and a ghost as ominous as the town’s namesake awaits her. Not only is the ghost of Rachel’s best friend, who died seven years ago, haunting the Whispering Willow Inn where Rachel is staying, she’s terrorizing Rachel.

Believing Peyton’s ghost feels slighted by her long absence and her sizzling, rekindled romance with too-hot-to-handle Luc, Rachel tries to make amends with the scorned spirit. Only to discover a web of secrets and lies that leave her questioning whether Peyton’s death was an accident, as reported…or murder.
But can she survive the ghost’s fury long enough to get to the truth?

A Shadow at Twilight
Mary Leo
When is love enough?

Hilly Thomson must once again give up her much-anticipated vacation in favor of her overbearing boss’s needs. Granted, her boss, Dillon Spencer, is now in a deep coma from a nasty car accident, but still…

To make matters worse, his spirit keeps appearing, mostly while she’s in the shower, asking questions and teasing her with his charm and sexy good looks. Before long this kinder, gentler Dillon has won her heart. But Dillon wasn’t alone in his car on that snowy road, and when he learns of the tragedy surrounding the accident his desire to return to his life is in question. Now Hilly, with the help of a few spunky, notoriously famous hotel ghosts, must convince Dillon that his life is worth fighting for, and nothing in this world or any other world can stop her from loving him, not even the threat of his returning to his old overbearing self.


A Shiver at Twilight
Erin Quinn
Destiny brings them together, but ghosts of the past try to tear them apart . . .

When Carly Ryan answers her friend's SOS on Halloween, she has no idea she'll end up stranded in a haunted house. But circumstances conspire against Carly and her rescue mission soon becomes a night of terror. Only the appearance of JD Dover helps her fight off the ghosts that lurk in every corner. Sexy, capable and undaunted, JD is more than happy to be Carly's knight in shining armor. Despite the creaking walls and eerie footsteps, despite the inexplicable ghostly happenings, Carly and JD can’t fight the attraction that consumes them and the passion that burns in their blood. Their coming together feels fated, but is it destiny or something more sinister that has drawn them to this haunted house? As they explore the attraction flaring between them, they fight to stay alive—but neither can guess the identity of the enemy they face or the lengths to which that enemy will go to cover up its sins.

All i can say is wow. I like anthology books i really do but it kills me when i read them and wish for more. It's a good sign but frustrating too. I find myself thinking man if this author had another 100 pages to work with to expand the story wouldn't it be awesome!?? Oh yeah. All three of these had that effect on me especially Calista and Erin's novella's. Mary's seemed much shorter than the other two but i could see her novella expanded to. These are ghost stories and i think that gives a author a liscense to have a little more fun. It felt like it anyway especially when you started reading about famous people as ghosts. I've got a say i am not much into thrillers and these all have a touch of thrill especially Erin Quinn's A Shiver at Twilight which she warns you about right before you start reading. I can definitely say i felt the chill she was going for but luckily the romantic bits were also there.  All three of these were really delighful romances if not a bit scary and creepy too. The perfect mix. I am not new to Erin Quinn's writing but this is different than her Mist of Ireland series. Far as i know I have never read Calista Fox or Mary Leo so it was a cool intro to their work as well.  4 out of 5 Modokker Book Pick stars for Touch of Twilight. Find out more about these three authors by checking out their websites.
Erin Quinn
Mary Leo
Calista Fox
Posted by Modokker at 11/02/2011 01:00:00 AM