Book review: The Next Always (book 1 The Inn Boonsboro trilogy) by Nora Roberts 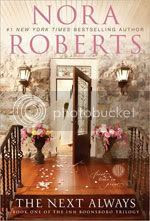 The Next Always - Nora Roberts

The historic hotel in BoonsBoro, Maryland, has endured war and peace, changing hands, even rumored hauntings. Now it's getting a major facelift from the Montgomery brothers and their eccentric mother. As the architect of the family, Beckett's social life consists mostly of talking shop over pizza and beer. But there's another project he's got his eye on: the girl he's been waiting to kiss since he was fifteen...


This is the first book in a new trilogy by Nora Roberts. I feels similar to her Bride quartet series to me so far. The book itself is packaged beautifully similarly to the Bride Quartet books. The series is about 3 brothers, the Montgomery's. Beckett, Owen and Ryder listed as youngest to oldest. I love love the names she chose for these guys. This book is Beckett's. He is the architect of the family although all 3 have things to bring to the table. Beckett's had a crush on book seller and widower Clare Brewster since she was 15. She's back in Boonsboro now widowed by her military husband with 3 little boys to raise.

A big part of this book is spent on getting the trilogy started and on details. Lots and lots of details about the restoration on the inn. That's expected i guess somewhat in the first book. You have to get all the players in place. There are quite a few. I could do with less construction talk though and hope there isn't as much in book two and three. Bride Quartet books were similar. Problem is when you have to much you tend to start skipping parts and sometimes miss important stuff. I didn't skip anything but i thought about it more than once. There is a bit of paranormal in this book with a ghost of a woman in the inn. It's kind of fun and makes sense with it being a old building. There is also some suspense when Clare finds she has stalker. I enjoyed the book and getting to know all the characters. I wish there had been a little more back story on Beckett and Clare from school but i had the feeling that there wasn't much there since she was high school sweethearts with her now deceased husband. Now that the intro to the series is done I'm hoping for more romance in book 2 that comes out in May of 2012. 4 out of 5 Modokker Book Pick stars for Nora Roberts The Next Always.  Read a excerpt and find out more about this book and Nora Roberts other books here. Nora Roberts
Posted by Modokker at 11/15/2011 01:00:00 AM