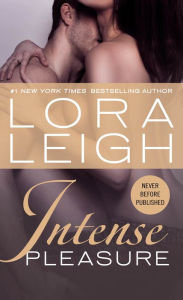 TOO HOT TO HANDLE
Her name is Summer, as beautiful and occasionally fierce as her name suggests. Her past has just come back to haunt her, and suddenly she's not sure who she can trust. Her longtime confidantes Falcone and Raeg seem to have Summer's best interests at heart. . .but it's clear that their desire for her still burns between them. Can they find a way to keep Summer safe-or will a bitter rivalry stand in their way?

Falcone and Raeg need to work together, now more than ever, if they intend to protect Summer from an old enemy who knows her dangerous secret. When Summer's identity as a sweet, Southern socialite gets out, the two men must find a way to draw out the ruthless assassin on her trail. . .and keep their illicit romance with her under wraps. But some passions are so intense they can't remain hidden. What are Falcone and Raeg willing to risk for the woman they both crave like no other,

I haven't read a Lora Leigh book in a while and I have read this series before so I was excited to get back into the series and see where this book could take me. Summer is not all she might seem. She a lot more complex. As a agent she's bad ass and can take care of herself but home with her family in the south she's daddy's little girl. As a agent she's burned out. She's done so she goes home. Falcone and Raeg are brothers who have worked with Summer over the years more Falcon than Raeg. While Falcon has embraced Summer Raeg has always pushed back at her and kept her at arms length. They have done this thinking they are protecting her from their father. Now though she has someone out to kill her and to protect her they have to stay really close to her. Not as easy as it sounds when Summer doesn't want their help and her overprotective family is in their business. I loved her brothers but the rest of the family was a bit annoying and I couldn't relate to her backward old time thinking about her parents. The way Summer bows down to everything her dad says. She's a grown woman not a teenager. Parts of the book I really enjoyed. I like Falcon and Raeg but Raeg got more book time than Falcon. I wanted to see a bit more of Falcon.  I think there should have been more discussion among the three about what was going on but I guess that would have made the book a lot shorter. While I enjoyed Lora Leigh books more in years past they don't seen to hold the same appeal as they used to. I liked Sinful Pleasure well enough but it wasn't good as I had hoped.