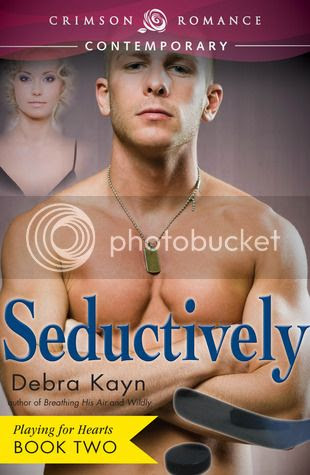 Book Blurb:
Independent and goal orientated, Diana Spenner has set her sights on buying the old Ferriday House and running her own Bed and Breakfast by the end of the year. Nothing will sway her from her plans, especially the famous hockey player Dominic Chekovsky, who can't take no for an answer. But, when Dominic strolls into Cottage Grove and begs her in his thick Russian accent to keep his adoring female fans away from him, she's not going to turn him down—because the job pays half a million dollars.

Dominic Chekovsky life is out of control. American women go crazy around him. They invade his personal space, leave their husbands for him, and make his life hell. Except, Diana. She's the one woman who always turns him down, no matter how many times he asks her out on a date. Now he's desperate. He needs Diana's help to figure out why she's the only female immune to his charm, so he can continue to play hockey in the United States. Maybe when Diana finally allows herself to say yes to having sex with him, he'll be over his wild fascination with the one woman who always tells him no.

Review:
This was a really fun and sweet romance.  Dominic is one hot hero (Hockey player. Russian. Big blonde athlete.  Enough said.) and my only complaint is I really wanted this book read to me by a deep-voiced man with a Russian accent, preferably one sitting next to me on the couch, rubbing my feet and ........OK, I digress, but this sexy little (112 pages) story really ignites the fantasy part of my brain.
Diana is a very disciplined, hard-working woman with the crystal clear goal of owning a bed and breakfast.  She's been working in the hotel business for several years and is ready to start her own business.   And as much as she dislikes Dominic and the lifestyle he apparently lives, she is not going to turn down half a million dollars for posing as his girlfriend for two weeks.
Naturally there is more to Dominic than meets the eye, and Diana is in deep trouble.  Ignoring her physical attraction to Dom was hard enough, but discovering the fact that he's a really nice guy makes it impossible to keep her feelings neutral.
Dominic's sweet wooing of Diana is romantic and touching, even as her resistance to his advances feels realistic and smart.  I loved the fact that as the reader, I felt romanced by Dominic even as Diana does.  Little by little I switched my loyalties from Diana to Dominic as his true nature is revealed, rooting for both of them and their happy-ever-after.