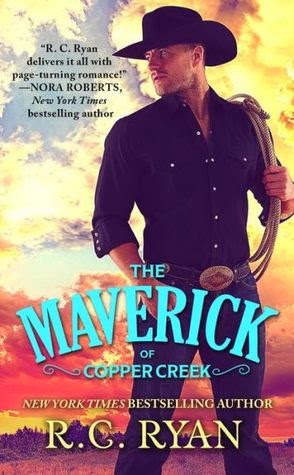 First love always burns hotter . . .
Ash MacKenzie broke his share of hearts when he left Copper Creek all those years ago and struck out on his own. Tall, tough, and proud. That's how Brenna always remembered him, and from the looks of things, he hasn't changed much. Once, she thought he could save her—whisk her away from her rough childhood home and start fresh together. Now she knows better . . .
Ash isn't planning to stick around town long. As soon as he uncovers the truth about his father's death and makes sure the family ranch is safe, he'll be back out on his own. And then he runs into Brenna Crane. It broke his heart to leave her once—a herd of stampeding horses couldn't make him do it again. But Brenna has made a new life for herself, one that doesn't include him. Now he just has to convince her to give their first love a second chance.


An amazing start to a new series by R.C. Ryan. Ash MacKenzie was a first born son to one of the toughest and biggest ranchers in Montana. At age 19 after years of trying to please his father and win his approval he never seemed to find a way to make that happen. Finally after spending the night in freezing conditions out on the range only to come home to find his father still saying he's not in the right place at the right time and not doing what he should be doing he's had enough. Taking only the clothes on his back he takes off. Leaving everything including the girl who had become his best friend and who had depended on him to be there for her. Nine years later tragedy bring him home and that's where the drama and excitement really begins.  This series kicks off with a murder mystery that i assume will span the series but this book also has a couples romance as well. The story begins with a explanation of  Ash's separation from his family and then shoots ahead nine years and picks up with Ash coming home to deal with his father's death.  He also want to see if coming home for good is the right thing for him as well as finding out if the girl he left behind is the right woman to spend forever with. The book slowly but steadily picks up and the characters find out that not only do they have the mystery of Ash's father's death but someone is out to get Ash or Brenna. You have some action, some suspense and of course some romance. You are kept wondering who the bad guys are. I had several ideas but was never sure until it was revealed. You won't be finding out what  happened to Ash's father in this book but you might get some clues. I loved the characters and the intensity between Ash and Brenna and the action toward the end was intense. You feel for the characters and you might even shed a tear or two along the way. It left me with a feeling of investment in the character's and wondering what might be in store for the MacKenzie family.