Catherine Peace THIS TIME NEXT YEAR Blog Hop and giveaway!

Guest author Catherine Peace
I wrote a book— one 38-page read with a cover. It’s about vampires. Well, a vampire. And a human woman. But it’s not really like True Blood, except that it kind of is. In retrospect, it’s like if True Blood and Interview with the Vampire had a 38-page love child.
In its own way, This Time Next Year is my love letter to the vampires I’ve adored over the years—to the Louis de Pon du Lacs, the Lestats, the Alucards, the Eric Northmans and even the Vlad Tepeses. It’s a short homage to the mythology and folklore that’s ingrained in my mind, a tribute to the light and dark sides of the fanged.
More than any other paranormal creature, the vampire takes the human experience and cranks it up to 11. Every passion is heightened—hunger, lust, anger, hate, need, love—and vampires live life accordingly. They take the greatest joy in whatever dominated them in life, and they utilize it to make their eternities fulfilled. It doesn’t always work. Okay, it almost never works. But they give their best efforts to making sure that it’s damn good to be them. They tend to be terribly self-absorbed.
Two of the three vampires mentioned in the story don’t quite fit the bill of the self-absorbed vampire, while the third embodies it perfectly. Marguerite, Kiernan’s maker, shows pity and compassion, and offers the chance of vampirism to him, though she doesn’t tell him about the bad side of vampirism. In kind, Kiernan offers the same to Moira, this time with complete information. He refuses to make the decision for her, while most would have taken advantage of her…eagerness. I attempted to make a legitimate relationship between the two, and not something built completely on lust and “OMG YOU’RE A VAMPIRE,” because that’s just lame. Moira is smart and capable and sure of herself. She’s not the type to fall for that, no matter how hot Kiernan is.
It’s a story with bite and heart. And sex.
What do you love/hate about vampire stories? 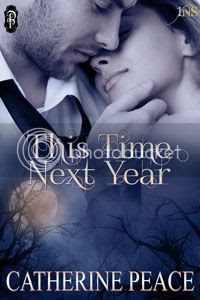 Vampire Kiernan Shaw has never forgotten the night twenty years ago when he’d been forced to stand by while another vampire killed a six-year-old girl’s parents in front of her. He’s spent the better part of the last two decades watching over her, protecting her and hoping for an opportunity to make amends one day.

Ever since surviving the vampire attack that killed her parents, Moira Curran has dealt with the resulting nightmares and abandonment issues the only way she could—by throwing herself into her biochemistry career, preferring a life of a hermit in her lab to facing the reality of her lonely life.

Madame Eve brings them back together for one fateful night. An immediate bond of sizzling chemistry and respect forms, but can it heal her fears and his guilt?

Catherine Peace has been telling stories for as long as she could remember. She often blames two things for her forays into speculative fiction—Syfy (when it was SciFi) channel Sundays with her dad and The Island of Dr. Moreau by HG Wells. She graduated in 2008 from Northern Kentucky University with a degree in English and is still chasing the dream of being super rich and famous, mostly so she can sit around in her PJs all day and write stories. When not being a slave to the people in her head, she’s a slave to two adorable dogs.
Facebook
Twitter
Blog: Going from Nobody to Somebody
Blog: The Pen Punks
Reviewer for Indie Books R Us