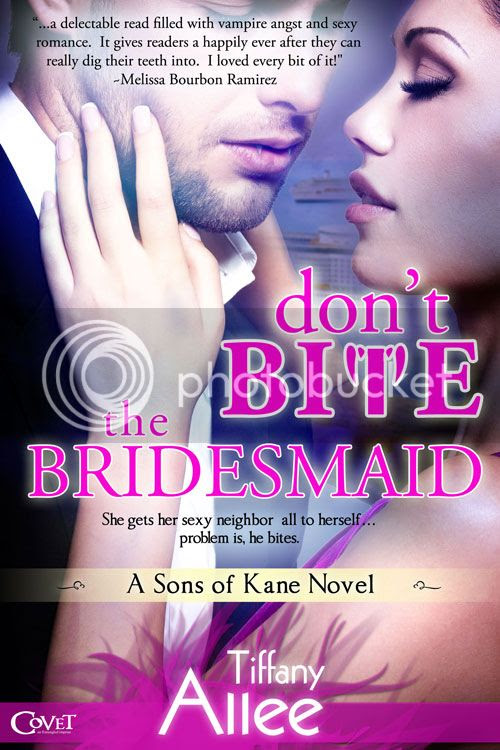 Blurb for Don't Bite the Bridesmaid:

Alice Shepard needs one thing: a date for her sister's wedding. And not just any date. A hunk who will make her fiancé rue the day he left her for her best friend. Her drop-dead gorgeous neighbor fits the bill—even if he is a bit quirky and never comes out during the day—and Alice has downed just enough appletinis to ask him. But she makes it quite clear that there will be no funny business.
Spending a week on a cruise ship full of humans while sleeping close to his sexy next-door neighbor sounds like a helluva bad idea to vampire Noah Thorpe. But his friends need time to get him out of a shotgun wedding—a vampire bonding that will tie his fate to a female vampire he's never met. And Alice's offer comes at just the right time.
What could possibly go wrong?


“That sounded like it hurt,” he said, kneeling in front of her and taking her foot into his hand.
“It’s fine. I’m just a klutz.” Her toe throbbed slightly, calling her a liar with every beat of her pulse.
He grinned at her red toe. “You didn’t seem like a klutz on the volleyball court today. I think you were trying to hide your blush. No doubt, terribly perverse thoughts about me were flying through your head.”
She gaped at him.
“Your toe is fine,” he announced, but he didn’t release her foot. He looked up and met her eyes, and the intensity of his gaze swept over her. Desire hit her like a bag of bricks, a swift blow that robbed her of her breath and made her whole body ache.
“I was thinking no such things,” she said, wishing her breathlessness didn’t give her away.
“Liar.”
“We aren’t right for each other. And what happened last night isn’t happening again.” It wasn’t. It couldn’t. There was no way she’d be able to stop things again like she did the night before. Not if he kept looking at her like that. And he was a vampire, just like Olivia. And she’d run off after swearing to love her brother forever. What would stop Noah from doing the same? Vampires weren’t normal people. She had to remember that.
“You’re right. We aren’t right for each other.”
Anger flashed through her, fanning her desire in a most annoying way. The greatest defense is a good offense. “We’re not. In fact, I can’t think of anyone less suitable for me.”
“Oh?” He quirked an eyebrow at her and she ignored it. How could he look so scrumptious and be so annoying at the same time?
“No. Besides, I’m not looking to be tied down.”
A feral grin blossomed on his face. “Don’t worry, Miss Shepard, if I tied you down I’d be sure to untie you in the morning.” 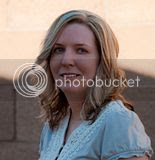 CPA-turned-romance-author Tiffany Allee used to battle spreadsheets in Corporate America, and now concentrates on her characters’ battles to find love. Raised in small-town Colorado, Tiffany currently lives in Phoenix, AZ, by way of Chicago and Denver. She is happily married to a secret romantic who tolerates her crazy mutterings.
She writes about ass-kicking heroines and the strong heroes who love them. Her work includes the suspense-driven From the Files of the Otherworlder Enforcement Agency series which revolves around a group of paranormal cops solving crimes and finding love, and Don’t Bite the Bridesmaid, a lighthearted paranormal romance (Entangled Publishing).
Tiffany has an MBA in accounting and nearly a decade of experience in corporate finance. All super useful stuff for a writer who spends far too much time trying to figure out fun ways to keep her characters apart, and interesting ways to kill people (for her books—of course!).
Tiffany is represented by Jill Marsal of Marsal Lyon Literary Agency.

Win a $10 Amazon Gift Card by filling out the rafflecopter below:
a Rafflecopter giveaway