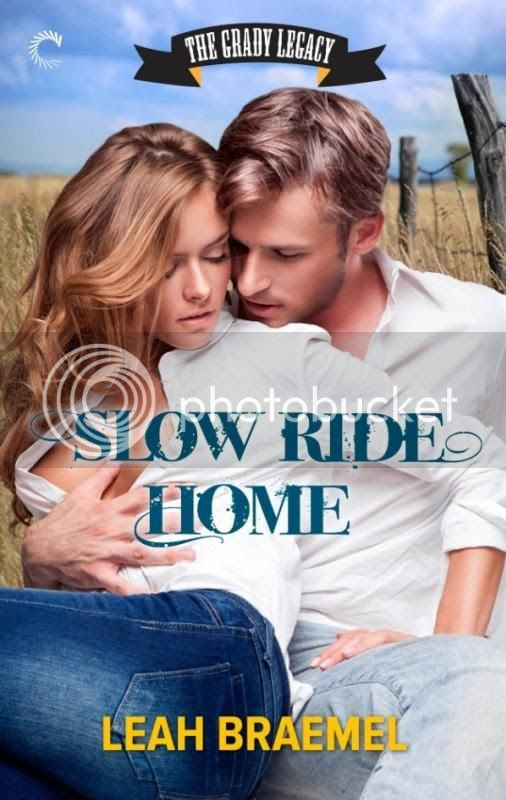 Excerpt link: http://leahbraemel.com/books/the-grady-legacy/slow-ride-home/slow-ride-home-excerpt/
Losing his father was hard enough, but now Ben Grady must face the fact that he and his brother may not be sole owners of their beloved ranch. To protect his family’s legacy, he’s forced to rely on the legal prowess of the woman who stars in his erotic fantasies: Allie O’Keefe. Ben’s never forgotten the illicit encounter they shared fifteen years ago—or forgiven himself for letting her go.
Allie thought she’d moved beyond the scandal that cost her Ben in the past. But working so closely with the seductive rancher arouses the wild child within the cautious woman she’s become. Though she tries to keep business and pleasure separate, Allie soon gives in to temptation, and discovers Ben’s sensual skills surpass even her X-rated memories…


Allie has every intention of leaving Bull’s Hollow forever after her investigation is complete. But there are a few complications. Not the least of which is that while saving the ranch, Allie’s lost her heart.
I'm excited to bring you this short interview i did with the fabulous Leah Braemel! I was lucky enough to spend some time with her this past summer at Lori Foster's Readers and Authors Get Together in Ohio.
1. Slow Ride Home is a different kind of book for you. Can you tell us a little about it and how you approached writing it that was different from your other work?

I’m guessing that by “a different kind of book” you mean one that doesn’t include a menage? While I did originally include a flashback to the menage Ben, Allie and Logan had fifteen years before, I couldn’t see having a modern day menage being true to Allie’s character and my editors asked me to reduce the element to a reference so readers wouldn’t expect another.

Another comment I’ve heard is about how there is a mystery element to it where Ben and Allie must prove if there is a lost Grady relative , though I didn’t think of it as being a mystery when I wrote it, and it’s not shelved as a mystery. I think readers of my Hauberk series are more likely to be familiar with that style of my writing, where the Tangled readers might be surprised.

2. What keeps you motivated to keep writing when you experience a big setback?

Sheer stubbornness? A binding legal contract to produce the book also helps in the motivation department. Though I must admit that there have been a lot of days when I’m declared to my family that “I’m done,” one of my biggest motivators to keep me sitting at my keyboard is opening up my email or Facebook and finding a note from someone who has read my previous books who had to let me know that they found something in them that they liked. I’d feel like I was letting them down if I walked away. So here I still am, plugging away.

Having said that, I don’t know if I could stop writing in itself. I’ve always had stories going through my head, and I’ve always written them down. What would change if I got that ‘big setback’ that I couldn’t get over, is that I’d go back to the way I worked before 2007 — I’d keep writing the stories but leave them on my hard drive unpublished.

3. If you had to start all over again in your writing career what would be the one piece of advice you would give yourself?

“Don’t wait so long to try” or maybe I’ll borrow the old Nike slogan of “Just Do It!”

Although I’d been writing since I was a pre-teen, I constantly heard “everyone has a novel they want published; what makes you think you’re any different/could succeed?” from almost everyone and “you suck” from the one person who had seen my writing before the mid 1990s. The only way I could stop the stories from going through my head was to write them down, but I didn’t show anyone my work until around 2004. Which meant I was in my mid-40s. I’d love to know what I could have accomplished if I’d started in my 20s, or even my 30s.

No Accounting for Cowboys, book 2 in the Legacy trilogy, will be Jake’s story. As readers of Slow Ride Home discover, Jake’s been keeping some secrets. In his book, he’s faced with several tough choices regarding his future and has to decide what path he should take. (With the help of Paige, the brand new accountant the family brings in to sort out their books.) Wrangling the Past

5. You’re stuck on a secluded island. Would you want the company of a really sexy man or a really good book. Which would you choose and why?

A really sexy man — because for me a sexy man is muscular and also very handy. So he’ll be able to build me shelter and find me food and as well as treat me like a goddess as I write my own books. ;)

The only woman in a houseful of men (even the cat and dog are male), Leah Braemel loves hiding away from all the dust bunnies while she writes sexy heroes and heroines finding true love. To read more about Slow Ride Home or any of Leah’s other books, you can visit her website, follow her on Twitter, or on Facebook.
a Rafflecopter giveaway