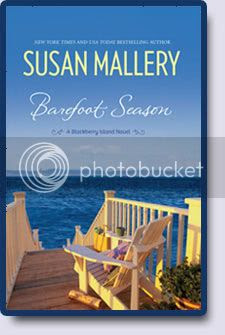 Michelle Sanderson may appear to be a strong, independent woman, but on the inside, she’s still the wounded girl who fled home years ago. A young army vet, Michelle returns to the quaint Blackberry Island Inn to claim her inheritance and recover from the perils of war. Instead, she finds the owner’s suite occupied by the last person she wants to see.

Carly Williams and Michelle were once inseparable, until a shocking betrayal destroyed their friendship. And now Carly is implicated in the financial disaster lurking behind the inn’s cheerful veneer.

Single mother Carly has weathered rumors, lies and secrets for a lifetime, and is finally starting to move forward with love and life. But if the Blackberry Island Inn goes under, Carly and her daughter will go with it.
To save their livelihoods, Carly and Michelle will undertake a turbulent truce. It’ll take more than a successful season to move beyond their devastating past, but with a little luck and a beautiful summer, they may just rediscover the friendship of a lifetime.

This is book 1 in a brand spanking new series for Susan Mallery. She's made a new website for it as well as she did when she started the Fools Gold series which has several book going for it now and a great interactive website. Barefoot Season was really hard for me to stick with at first. It's not because the writing wasn't good. It was the negativity of the characters. You don't start out with a sunny outlook. It starts out with Michelle going home after being wounded Afghanistan. She's seen some horrific things and had to make some painful decisions and now she's going home. Home was another painful place for her. She left 10 years ago after a series of incidents that involved her best friend and both their sets of parents. She essentially ran away from home at 18 and joined the Army. Now she comes home and has to deal with betrayal and try to deal herself. It's almost more than she can handle and you wonder if she's going to make it or not. Luckily she's got a old Army friend, Sam who shows up and her old best friend Carly which she has a difficult relationship with at first and then there is Jared. Jared is a vet himself although Michelle doesn't know it at first. She rents a room in his house because she can't bear to stay at the Inn. He doles out words of advice but doesn't hover over her. He shows up to rescue for herself now and then but again doesn't push. The characters are so real and genuine, You feel their pain. That was one of the problems when i first started reading. The negative painful feeling of Michelle got to me. I'm a Army Veteran myself so it bothered me to read about how hurt she was on in the inside and out. I know Susan Mallery's writing though so i stuck with it. About 1/4 of the way through you meet Jared and from there it was easier to read. I thought maybe this guy is going to be the one to help get her on the right path.  I was totally on board with this book by the end and loving it. I think this is one of the best books I've read so far this year. It's about two friends finding their way back to each other. It's a love story too. It's about finding your way back from the brink of losing yourself and finding you're OK. It's a must read. 5 out of 5 Modokker Book Pick stars for Barefoot Season by Susan Mallery. Find out more about this book and the whole Blackberry Island series by checking out Susan Mallery's new website for this series. www.blackberryisland.susanmallery.com Read a excerpt while you're there.
Posted by Modokker at 3/22/2012 01:00:00 AM